April’s first square is a daffodil.  To give credit, I got the pattern here on Craftsy, for $3.99 but the pattern actually irritated me quite a bit.

It was very poorly written.  Many of the instructions were incomplete and unprofessional.  For example, when changing colors the instructions failed to indicate to finish off.  This even included the end of the pattern.  This may seem obvious, but most crochet instructions indicate that you should not finish off unless instructed to do so.

I did not like how the block went from circle to square by working 3 dcs in between stitches instead of having made a ch 1 space in the previous row for that purpose as is usual with granny squares. 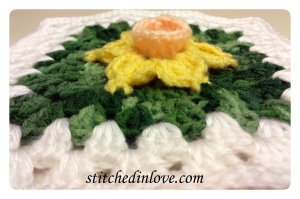 The pattern is marked as easy but I strongly disagree with that.  I was able to figure it out and get it to work, however I don’t think that a beginner would have been able to pick it up and get a good result without help.  For example, a picot stitch is used for the tip of the flower petals, however the pattern does not give specific stitch instructions for a picot.  There are two issues with this.  One: A picot is not a beginner stitch, it is a more advanced stitch.  Two:  There can be different ways of doing a picot so stitches like this should never be assumed.  Additionally, 3-d work and shaping are generally not considered beginner level.  I would really consider this more intermediate to advanced.

All that being said, the square turned out very charming with another 3-d aspect.  But I think I’ll take time tomorrow to rewrite the pattern and make these corrections mentioned and see if it turns out any better.