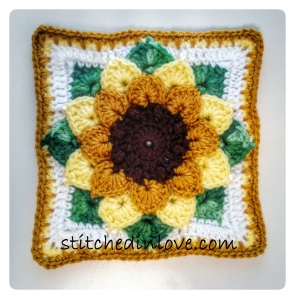 This square has been a monster!  I have had the most difficult time with it and have had to frog and rework it on multiple occasions.  It has been by far the most difficult square to-date, mostly because the pattern I was using (here) was for a 12-inch rather than a 7-inch square.  I reduced my hook size and even changed treble crochets in the pattern to double crochets, but I just could not keep it to the 7-inches. 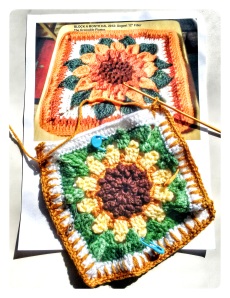 The original square I wanted to make before putting the petals in.

So what I ended up making turned out to be a combination of two different “sunflower” patterns, plus the background from June’s Square  Eleven.

Both patterns were problematic.  The original square I wanted to make was unnecessarily  complex in design.  The entire background is crocheted first and the petals are then put in later.  But I really liked the look of the petals in this one so I tried for more than a week to get it right.  I had also never used what is called the crocodile stitch (the petals) before, which has become very popular lately. 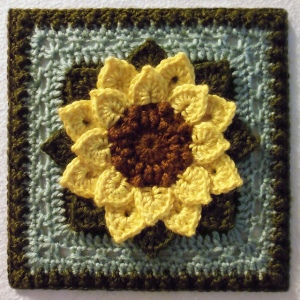 When I realized I just wasn’t going to get it to work with the size I wanted, I moved on to a pattern I had saved as backup.  Pattern here.  But when I got to the row that would be the green leaves in this pattern, it seemed like there were several rows missing as it went directly to the edging, skipping the last round of petals.  So I had to repeat the previous petal rows myself.  I didn’t really care for the open work on the background for this one so this is where I used the background from June’s Square  Eleven to form the final square shape.  Additionally, the petals’ tips were not pinned down in this pattern by working into them on subsequent rows like on Square Eleven so I added this bit too.  I tried it without pinning the tips down, but the petals just stood up straight.  This might have improved slightly with blocking but I felt better tacking them down.

I really liked the saw-tooth edging on the original square, so I also incorporated a bit of that, though I really don’t think I had room to do it justice.  I like how the square turned out overall, but it took me a good two weeks to get this one figured out!

I am really running out of time this year with projects I have planned.  I wanted to get the rest of the Granny Squares done in September to get the finished product done for Christmas, but I’m not sure that I’m going to make it.  I have a few time-sensitive projects I have to get done including the kids’ Halloween Costumes.  Just wait till you see what I have in store for these. It’s going to be so fun.  These next two sets of projects are probably going to take me the rest of September and most of October so I suspect the finished Granny Square Project will be a late Christmas present to its surprise recipient.  I guess that’s ok since this person doesn’t even know they’re getting it.

Filed under The Granny Square Project

One response to “August – Square Sixteen”